Difference between revisions of "Acrocanthosaurus"

The Acrocanthosaurus is a large, playable carnivore in Beasts of Bermuda. It's one of the slowest carnivores in the game, only being faster than the semiaquatic Ichthyovenator's terrestrial movement speed. However, it has a decent damage output and bleed, in addition to its ability, to counter it. It also has the highest health and size. The Acrocanthosaurus is a superb ambusher due to its high damage output. It is the carnivore most capable of hunting the huge Apatosaurus and the swift Parasaurolophus.

Its attacks are fairly straightforward, possessing both a forwards-aimed and a downwards-aimed bite as its primary and secondary attack.

Prior to the game's early access release, there was a very powerful Acrocanthosaurus known as the Demon Acro, which patrolled the temple on several retired maps. It was extremely powerful and guarded the secrets of the temple. It has been removed from the game.

The Glimmer Acrocanthosaurus, a donor-exclusive skin, is shown in the two screenshots below. 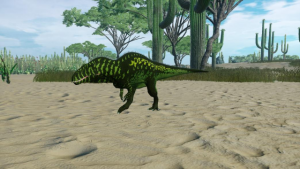