Difference between revisions of "Apatosaurus"

The Apatosaurus, towering over the landscape

The Apatosaurus is a playable herbivorous creature in Beasts of Bermuda, as well as the largest playable creature.

Being big, however, requires a big appetite, and so the Apatosaurus must consume at a very frequent rate. Fortunately, it's not a picky eater: Its diet consists of almost any kind of plant, and it can even consume trees as an adult. It also must drink copious amounts of water, and this sometimes causes it to sip entire ponds straight up dry!

Thanks to its immense bulk, the Apatosaurus has superb resistance to harsh weather and boasts the highest amount of HP in the game, as well as being able to attack from any angle with incredible knockback and damage, making it VERY hard to for any predator to kill. This effectively discourages almost every predator from attacking it in the first place, letting the Apatosaurus live a generally peaceful and undisturbed adult life.

- Is somewhat vulnerable when young

- Leaves a large and easily detectable trail of smell

Secondly, when the Apatosaurus walks, its huge footsteps knock nearby creatures out of its way.

The Apatosaurus's huge size causes it to walk at a lumbering pace. It is in fact the slowest creature in the game, and most creatures are able to out-speed it simply by walking. Thus, fast creatures can give it a hard time by performing hit-and-run tactics on it. A Utahraptor pack is able to pull this off quite decently.

Additionally, large carnivores such as the Acrocanthosaurus can inflict serious bleed damage to an Apatosaurus, as well as survive multiple tail whip attacks, making it a threat to the Apatosaurus.

Despite this, the Apatosaurus still remains a very dangerous creature to fight, and it is not uncommon to see an Apatosaurus completely overwhelm its opponent. 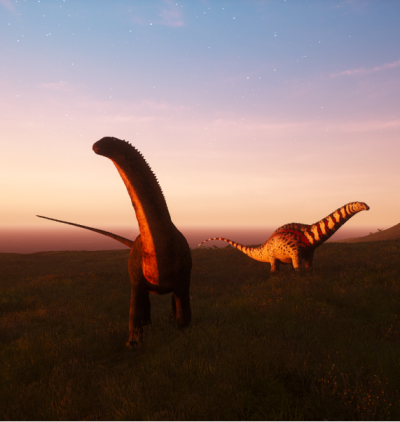 A pair of Apatosaurus migrating for food during sunrise.