Carnivores must rely on eating meat in order to survive. In Beasts of Bermuda, there are two sources of meat in the game. The first comes in the form of carcasses, which spawn any time a player or AI animal dies. The second source of meat for carnivores comes in the form of fish. Most carnivores will have extreme difficulty fishing if they are not harboring the piscivorous trait. All piscivores are carnivores, and thus are capable of eating carcasses as well as fish.

Larger carnivores consume carcasses more swiftly than smaller ones, and thus a larger carnivore must either eat larger prey or eat smaller prey than a tiny carnivore would need in order to survive. 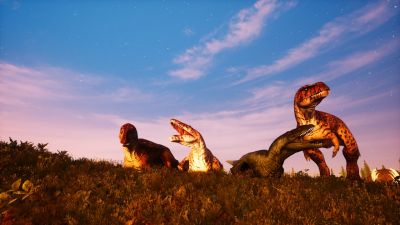 There are many in-game carnivores currently available for play. These are:

Like herbivores, carnivores are also capable of overeating and gaining weight. In order to do so, one must continue eating food from carcasses or in the form of fish beyond the point at which their food is full.

Carnivores gain points for successfully hunting and killing other players that are not a member of their species. This includes all piscivores, as they too can eat carcasses if need be.

It should be noted that not all carnivores appear under the Carnivores tab of the Dinosaur Selection UI screen. Some are found under the Marine tab or the Flyers tab.

All carnivores are stressed by the presence of other carnivores as well as herbivores. They all lose comfort when in close proximity to others that are not their kind or not in their group.

A pair of T. rex sleeping.

Carnivores are only capable of grouping with others of their own kind, and cannot group cross-species.

Aggressive play, territorialism, and hunting are all encouraged for carnivores with the exception of ones possessing the piscivorous trait. Since non-piscivorous carnivores need to kill and eat other players for food in order to survive, they will likely be aggressive and one should be warily approaching a carnivore. Players with high food will lose food more quickly than ones with low food, while simultaneously raking in points more rapidly. Well-fed carnivores also recover HP, stamina, and ability power more quickly, thus providing an incentive to keep oneself well-fed. This is to deliberately promote an environment in which carnivores always want to top off their hunger meter, providing a gameplay reason for one to be on the hunt frequently.