Difference between revisions of "Elasmosaurus" 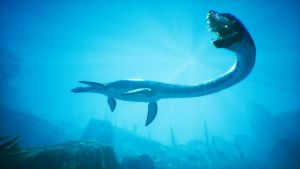 The Elasmosaurus, navigating the ocean

The Elasmosaurus is a playable aquatic creature in Beasts of Bermuda. Though it does not possess the high health and damage of the Mosasaurus or the Kronosaurus, it is much faster than the latter, and its mobility can be used in a variety of situations.

It is piscivorous, meaning it specializes at eating fish. The Elasmosaurus can consume fish with ease thanks to its very long attack range. Finding fish is not a problem for it either, as it can reveal the location of fish from far away by holding down the scent key.

Despite being the weakest aquatic, its high speed allow it to dodge its opponents, and it even has the ability to grab and drown really small prey in a similar fashion to the Mosasaurus. This makes it a prominent enemy for other piscivorous creatures such as the Pteranodon.

+ Can detect fish from far away

Unique Signature Attribute: The Elasmosaurus has an automatic aiming system, so it will always strike its targets when they are within its attack radius.

Unique Attribute: By using the scent key, the Elasmosaurus will highlight fish from far away, making them much easier to locate.

The Elasmosaurus is rather fragile, as it has relatively low HP for its size. It also starts the game as a vulnerable creature, and like all aquatic creatures, it can die from beaching itself.

The Elasmosaurus is also susceptible to being preyed upon by the Mosasaurus and the Kronosaurus. However, The Elasmosaurus is faster and has more stamina than the two, allowing it to dodge their attacks and, if needed, defend itself by retaliating back. Nonetheless, the Elasmosaurus is better off escaping, as one bite from a large predator can be an immediate death sentence for it.