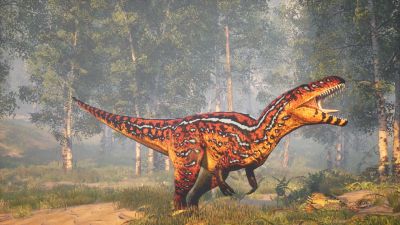 The Megalosaurus, roaring in the dawn

The Megalosaurus is a playable carnivorous creature in Beasts of Bermuda. It is a fast predator that can chase its prey for long distances without tiring out from stamina. Such prey include the Parasaurolophus, Lurdusaurus and Ichthyovenator, as well as most juvenile creatures.

- Has to eat quite frequently

Special Ability: The Megalosaurus can gather the information of its prey. When the Ability Key is held down, a cursor will appear on the screen. When it is released, the creature in the center of the cursor will be identified, allowing the Megalosaurus to see its stats. This ability consumes ability power.

The Megalosaurus is far from a dominant predator. It is threatened by predators much more larger and dangerous than it, such as the Acrocanthosaurus and the Tyrannosaurus rex, as well as the Mosasaurus if near a large body of water.

The Megalosaurus is also sensitive to harsh storms. It must take refuge from intense storms by hiding in caves, which may already be occupied by another predator.