Difference between revisions of "Mosasaurus" 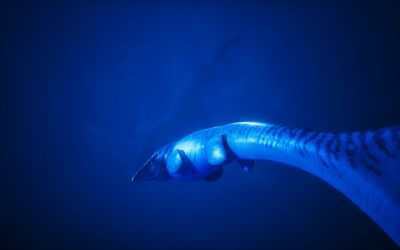 The Mosasaurus, roaming the dark abyss.

The Mosasaurus is a playable aquatic creature in Beasts of Bermuda. It is an incredibly powerful and mobile predator capable of leaping out of the water to reach its prey, then locking it tight between its jaws before violently thrashing it into the water, dragging it down into the ocean depths in order to drown it and thus kill it.

The Mosasaurus is able to grab almost any creature its size, and can further bolster its grabbing capability through the use of talents. Due to this sheer size range of creatures it can grab, combined with the nearly impossible chance of escaping its locked jaws, the Mosasaurus has been well-received as one of the most feared creatures in the game.

Its biggest rival is the Kronosaurus, who is also an extremely deadly aquatic predator that competes for the same food source.

With the simple mistake of beaching itself, the Mosasaurus can suddenly turn from threatening to harmless. While on land, its diminutive flippers do little to scoot its massive body forwards, causing it to move and turn at a painfully slow rate. Comfort constantly decreases at this state and predators can easily kill it, so it must get back to the water as soon as possible or it will inevitably die. 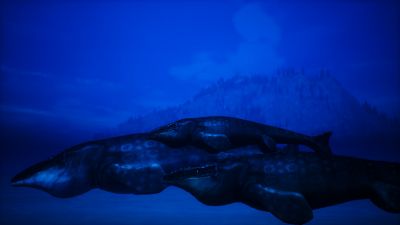 A family pod of Mosasaurus.