Difference between revisions of "Parasaurolophus" 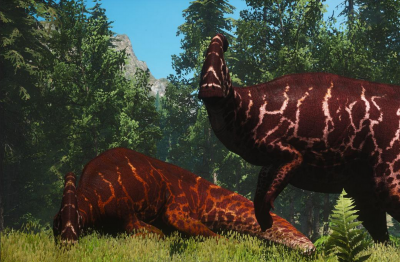 Parasaurolophus is a medium sized herbivore and currently one of three ornithopods in the game, joined by the small Oryctodromeus and the semi-aquatic Lurdusaurus.

As a hadrosaur, the Parasaurolophus lacks the major offensive capabilities of the other herbivores currently in the game. While it can be just as dangerous as other dinosaurs, if given the chance, Parasaurolophus' primary defense is to flee from large threats such as Acrocanthosaurus or Megalosaurus. It uses its superior speed and stamina to outlast them in a chase. Even if caught, a Parasaurolophus can take a number of hits before going down, allowing it to fight back against its assailants or possibly escape before death by tiring them out.

The Parasaurolophus is very speedy and has a large stamina pool. Use your speed and endurance as your first line of defense against a predator. The Parasaurolophus has moderate weather resistance. Only the most severe storms will pose danger to death by exposure. Your best defense is your speed rather than close combat against hungry adversaries.

Parasaurolophus falls prey to many species of carnivores, but a healthy adult is no pushover. Powerful legs and a considerable weight allow adults to severely injure, and possibly even kill, smaller carnivores that they cannot outrun.

The Parasaurolophus has a characteristic crest which it uses to communicate with herd members.

Crouch allows to toggle between quadruped and bipedal stances.

The Parasaurolophus is able to graze while moving at the same time, and is the only herbivore in the game that can do so.

For more information about the Parasaurolophus, watch this video.

A herd of Parasaurolophus migrate along the beach during sunset.