Difference between revisions of "Resting"

Resting is a mechanic that allows players to become temporarily vulnerable in exchange for receiving many regenerative benefits. In order to rest, a player must press the Rest Key while standing still and performing no other actions. The player will sit down. If the Rest Key is pressed again while sitting, the player will fall asleep, entering a more intense state of resting. In order to get up, pressing the jump or forwards key will allow the player to get back up onto their feet. Sleeping always grants stronger benefits than just sitting down.

A player must be cautious when deciding when and where to rest, as it comes with a drawback. While sitting, a player is unable to perform many actions. Most notably, they cannot move or attack. One exception to this is the Apatosaurus, which can still use its tail whip attack while sitting. No creatures are able to perform any actions while asleep, with the exception of waking back up. The amount of time it takes to wake up, and then stand up, can be several seconds long, potentially presenting an opportunity for attack. 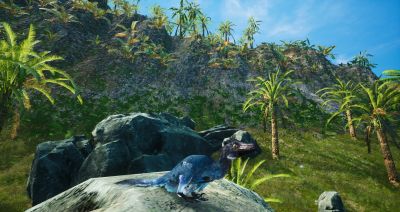 In addition to resting, there is also sleeping. It does all of the same functions as resting, but more effectively. 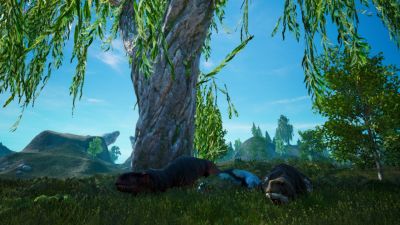 A pair of Megalosaurus sleeping.
Retrieved from "https://wiki.beastsofbermuda.com/index.php?title=Resting&oldid=1196"