Difference between revisions of "Saichania" 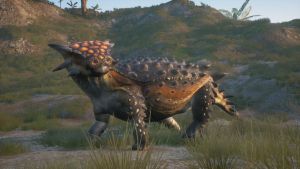 The Saichania, trekking through grass

The Saichania is a playable herbivore creature in Beasts of Bermuda. It is a large, durable creature that possesses many defensive abilities that greatly help it defend against any would-be attacker.

Thriving in battle, the Saichania can use its weaponized tail to cripple its enemies, oftentimes causing them to limp almost immediately after receiving a hit. The Saichania can also turn in place to ensure its tail is facing its opponent, but even if caught by surprise at the front, it can defend its head by using its spiky shield, reflecting incoming damage right back at the attacker.

Unfortunately, all these defensive capabilities come at a big cost: a severe lack of mobility. The Saichania is a terrible runner, and will often find itself unable to escape certain deadly situations.

+ Deals high injury damage. Can cripple even the largest predators.

+ Can turn in place

Unique Signature Attribute: The Saichania is immune to injury, meaning it will never suffer from bone-break.

- It is highly recommended to invest in Combat talents to allow your Saichania to defend itself significantly better.

- Play with a high FOV to observe your surroundings better, ensuring that even your blind-spots are within sight.

- Placing your head against a wall is a good strategy to force carnivores to approach you tail-first.

- An aquatic Saichania build is possible by maximizing the Swim Speed and Strong Lungs talents. A swimming Saichania can prove very difficult for a Mosasaurus to kill.

The Saichania's slow walking and running speed will often put in many unavoidable scenarios.

- Though Saichania doesn't have many predators, a very large pack of apex predators will be able to overwhelm a lone Saichania.

- The Saichania often fails to flee from nearby floods and tornadoes, and perhaps not even locate shelter in time.