Difference between revisions of "Velociraptor" 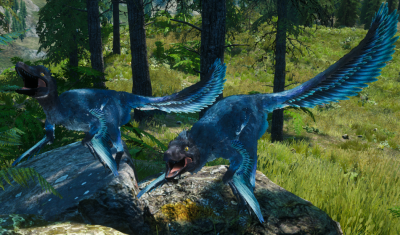 A pair of Velociraptors vocalizing on a rock

The Velociraptor is a playable carnivore in Beasts of Bermuda. It is one of the smallest playable creatures in the game, rivaled only by the currently unreleased Oryctodromeus

The small stature of the Velociraptor gives it a plethora of advantages, such as squeezing through rocks, surviving immensely high falls, climbing trees, and most importantly, staying hidden. It can also jump at incredible heights: the highest of all creatures, and is even able to control the direction of its jump while in mid-air, allowing it to almost glide in the direction it chooses. Its high stamina pool (a full grown possessing 150) most definitely compliments its jumping.

Oftentimes, it is interpreted as a weak and skittish carnivore, but it is deceptively one of the strongest. Such small size allows the Velociraptor to dodge attacks and bite its targets with incredible agility. With enough careful practice, a single Velociraptor can kill unbelievably large creatures such as the Tyrannosaurus rex!

+ Can climb up trees and rocks

+ Can kill larger prey if player is skilled

- Terribly low health, to the point where it will die from one hit by a large creature

Unique Signature Attribute: The Velociraptor can climb up trees and rock walls by pressing E when jumping near a climbable surface. Pressing E while climbing will detach the Velociraptor, while pressing Spacebar will cause it to leap off the object.

Unique Attribute: The Velociraptor possesses a significantly enlarged amount of stamina, having been granted 150 instead of the standard 100.

The biggest weakness of the Velociraptor is its frail health. Oftentimes, only one or two hits are needed to kill a Velociraptor.

The Velociraptor will often attempt to attack its target's blind spots, such as the back of the feet and the tail. Creatures that have attacks that reach near or beyond their feet such as the Ichthyovenator, Apatosaurus and Saichania can effectively brush off any Velociraptor that dares do so.

Lastly, the Velociraptor has very low weather resistance, and must seek shelter in even mild rain. 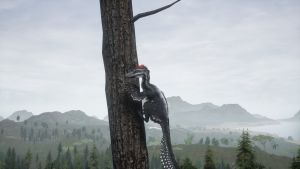