Why was Beasts of Bermuda created?

The creation of Beasts of Bermuda

Why was Beasts of Bermuda created:

We wanted to create a game that we would be enjoyable to play and we wanted to make people satisfied with a dinosaur game and it's gameplay. It's also a way for us to share our fascination/passion for dinosaurs. We were highly "trained" players in different pvp games and we wanted to take those aspects into this game and make it enjoyable and skill based, wherein people can get better and better and the journey of getting better never stops.

What was the main drive to keep improving the game:

When we first started the project we mostly did it for fun, but people kept liking and playing the game we're making. We also got a lot of feedback which helped a lot to get new and refreshing ideas for the game. The support we got from out fans kept encouraging us to continue to keep improving the game, both the gameplay and graphics, to make BoB not one of those games that would be forgotten. 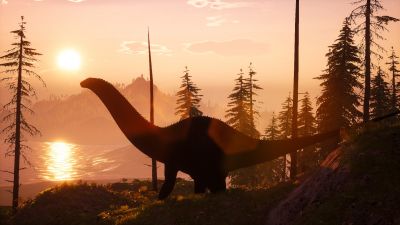 Why did you want to add talents:

After the core implementation of the game was finished, when the game's free-roaming was working completely, we wanted to make the game's pvp more interesting by adding talents which you could use to make your dinosaur stronger. After a couple of weeks of thinking the idea came to make a talent based system in which you can use talents to upgrade certain abilities, like faster regain of stamina, being faster in swimming or have a stronger bite.

How was the relationship between the devs during the creation of the game:

We (the developers) have been communicating on a regular basis from the beginning of the development of the game. We would communicate a lot about certain features and if it was a good idea to add them and there would also be conversations about new mechanics and ideas.

Why did the dev-team chose this art style for the game:

We chose a cross between Mayan, and Aztec with a hint of West Coast Indigenous Art because of the region of the Bermuda Triangle is in South America where most of that art resides, as well as aesthetic choice. The west coast patterns are put in to separate and make them a little more unique to the game. Visually we wanted something clean yet old looking. The color scheme of the game generally is bright and happy, because it takes place in a tropical environment.

Some words from the staff of BoB: