Megaraptor is a Mid-Tier carnivore that is faster than Megalosaurus aswell as more fragile. It is basically a glass-cannon and is fully intended to be so.

- Able to ability up to higher places, for safety, when the talent is maxed out along with Powerful Legs

- big hitbox for such low Health

- Will be Trope food once grabbed and dropped to their death 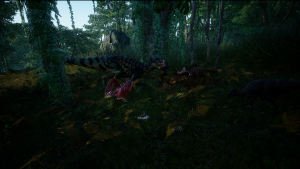 A Megaraptor caring for their offspring.