Difference between revisions of "Ichthyovenator" 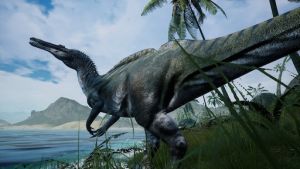 The Ichthyovenator, prowling the shoreline.

The Ichthyovenator is a playable piscivorous creature in Beasts of Bermuda. Though somewhat slow on land, it is adept at moving in water. It uses its great aquatic mobility for a variety of uses, such as catching fish, travelling long distances, initiating combat or make a swift escape from predators.

The Ichthyovenator is difficult for most predators to catch, as it can dive into the water when chased by larger terrestrial creatures, and scramble back onto the shoreline when approached by deep-sea threats. Adding to its hard-to-catch nature is its special ability to escape the grab of the Mosasaurus! But be reminded that Ichthyovenator will not always flee its foes. Sometimes it will take them head-on. With its fast attack speed, the Ichthyovenator can take on threats its size.

+ Can rely on fish instead of hunting other creatures

- Is prey to aquatic predators

Special Ability: Using the Secondary Attack when trapped inside the jaws of a Mosasaurus will allow the Ichthyovenator to struggle out of it, though it costs a high amount of ability power and injures the Ichthyovenator in the process.

Unique Attribute: The Ichthyovenator can detect fish by using its scent key. It will highlight all nearby fish, making them much easier to spot.

The Ichthyovenator has its predators. In the water, a Kronosaurus may be able to swiftly ambush it before it even has a chance to react, and on land, it faces danger from the Tyrannosaurus rex and the Acrocanthosaurus, both of which are faster runners than the Ichthyovenator. Additionally, the Lurdusaurus can pose a threat to the Ichthyovenator, as it can chase it in the water and pummel it down with powerful attacks.

The first teaser of a new model Ichthyovenator model, which was scrapped due to its rough look 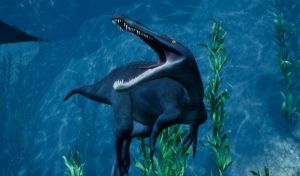