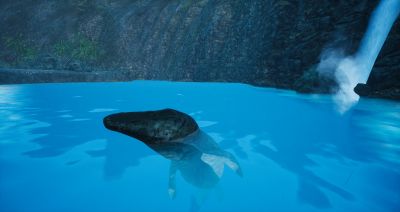 A Mosasaurus at the Surface of a Freshwater lake.

All marine reptiles must occasionally surface in order to breathe. Aquatic creatures in our game are no exception, and must occasionally breathe in order to survive. They hold no purpose for drinking water given their lives are indeed lived in water. This left a hole in the mechanics that water and thirst provided towards other creatures. Air fills the gap on the UI for aquatic creatures, occupying the blue sphere. It grants many of the same benefits or drawbacks a well-hydrated or dehydrated terrestrial creature would receive. These benefits and drawbacks are shown below:

Without any other action, an aquatic creature can last a significant amount of time under the water without taking a breath. The rate at which they exhaust their air supply is very small while stationary, lasting an hour before they begin to die due to lack of oxygen. Actively sprinting consumes oxygen, but only a small amount. A player can sprint for a long time without worrying about air, only surfacing occasionally. Using your bite attack consumes moderate oxygen. Use of any ability that consumes significant ability power such as grabbing will consume lots of oxygen. Combat consumes significant oxygen, likely causing creatures to need a breath in the midst. The Elasmosaurus does not consume additional oxygen to use its bite, but the Mosasaurus does.

In order to refill on air, one must surface and then press the use keybind in order to take a breath. Taking a breath immediately grants 15 air, and then continuously grants 15 more air each second until the player dips below the surface.

Fish grant a slight amount of air, mostly to offset the air used during the Elasmosaurus' bite attack used to catch the fish such that it remains a neutral activity.