Nesting is a mechanic in Beasts of Bermuda where a pair of users can create offspring. The nesting mechanic has unique benefits for both the parents and the children. 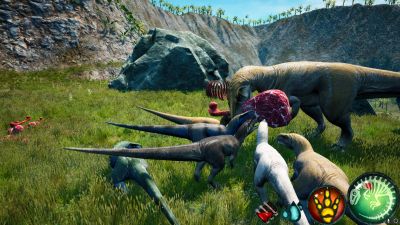 An adult Megalosaurus feeds a horde of babies after a successful hunt.

In order to nest, there must be two mature players of the same species and opposite genders in a group together. For a creature to be considered mature, they must be 0.8+ in growth. The two given players must then mate.

To mate, they need to be within a short distance of each other, and have full ability power and stamina. If any of these conditions are not met, the game will tell you that you cannot mate.

If you succeed in mating, both players will lose their ability and lie down. The female will receive an egg HUD in the top right corner of her screen (default UI layout). The fullness of the egg icon shows how far along in gestation the egg is. During gestation, the female will receive a large drop in average comfort, and her food and water will drain quicker. These negative effects can be reduced by investing into the Good Parent talent (commonly named GP). Once the egg is ready, the icon will appear full and receive a number on top of it. The female can mate and carry as many eggs as she'd like, and the number will change in accordance to how many are ready to be laid. 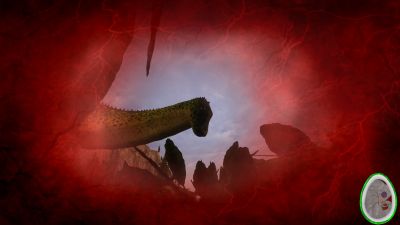 A baby Apatosaurus views its mother from within an egg.

The female then can lay her egg in a nest. Nests can only be made by the male, and he must have full ability and stamina to do so. By pressing the nest key (default “B”), he will lose all ability power and stamina, and a nest will appear. If the ground isn’t flat enough, the male will be notified, and no nest will be created.

For an egg to incubate, a player must be inside of the given egg. Incubation takes 10 minutes ( group members laying on eggs reduce the incubation time by a max of 50% ), regardless of the species (aquatic creatures are an exception, as they perform a live birth).

Eggs do not spawn AI dinosaurs. Instead, they spawn players. In order for a player to spawn as an egg, they must choose the egg option in creature select. Their screen will then show a list of available eggs, and the user must select the type of egg they’d like, and then choose the parents.

An example of an inherited talent.

The egg screen is mostly red, with an empty space in the center where the player can view their surroundings. There’s an egg icon in the bottom right corner of the screen with a yolk in it. As the user grows inside of the egg, the yolk will progressively become smaller. Eggs grow at 0.025 per tick, from 0.0 growth up to 1.0. Once at 1.0 growth as an egg, the yolk will be gone, and the player will be prompted to hatch using the ability key (default “Z”).

Once a player hatches, a gender will be randomly selected for them, and they will receive a unique mix of their parents’ skins.

There are a handful of perks to nesting; some are more impactive to gameplay, whereas others are more cosmetic. These include...

Parents receive the Near Children buff from their nearby offspring who are below the growth of 0.8, which increases their growth speed.

Players who are nested into the world of Beasts of Bermuda receive improved inherits. Inherits are set from the moment the egg is laid, based around the talent trees of the parents; with of course some random generation sprinkled on top. The bigger the parents are, the better the chances of good inherits.

While the talents the parents have affect what inherits their children may get, their personal inherits do not (with the exemption of Good Parent inherits). If a parent has +2 Nimble Footed, their children cannot earn Nimble Footed inherit from their parents, unless extreme random generation dictates so. This is incredibly rare.

Typically, a child has the potential to earn a +1 from each parent. With two +1s in the same talent, the offspring will receive a +2. If a pair has gone 3/3 in the same talent tree, chances of +2s in the given talents are far higher than an egg from parents with 3/3 in separate talent trees.

When nested, players can get unique skins mixed from their parent's skins. This can result in any combination of colors and patterns, as it is possible to mix them all! On top of this, there are unique skin mutations that have a rare chance of appearing every now and again.

If the mother is damaged during gestation, the eggs may receive negative effects. Laid eggs that receive damage do not affect the inherits.

In addition, if a player takes an egg from an incest pair, their chances of receiving positive inherits are substantially lower, and they’ll be far more likely to gain negatives instead.