An image showcasing the end of the map's inland sea.

Ancestral Plains is the largest map currently functional in the game. It features a large ocean and a variety of different terrains and landmarks able to be explored. Currently the map is the most widely used on servers both official and community-run, making it important to know where you're headed. If you are new to the game and this map, it is recommended you use a Pteranodon to fly around and get a feel for the landscape before you begin a journey as a terrestrial or aquatic creature.

Ancestral Plains currently features rivers, of which there are two on the map in total. One drains into a mid-sized lake and the other drains into the inland sea. Both feature varying strengths of current, able to pull and drag young creatures and poor swimmers with it. If a current exercises a strong enough effect on one's creature, there is a possibility of drowning. Be careful!

A well-equipped aquatic creature such as a Mosasaurus with speed talents or an Elasmosaurus may be able to swim up either of the rivers. 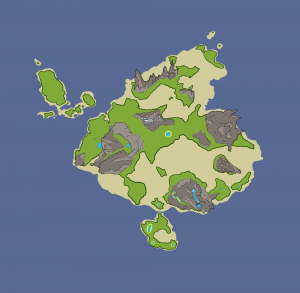 A simplified map showcasing the geographic features of Ancestral Plains. 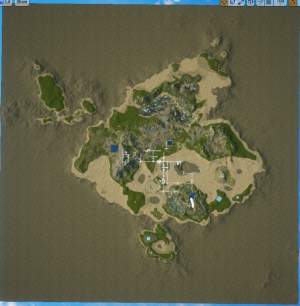 This map contains a mid-sized swamp, filled to the brim with fresh water and edible plants. While it is a great place to raise young on a sunny day, the area is very close to sea level, and floods easily during any type of storm surge. However, the tide does not normally reach the swamp. Also hidden within the swamp is one of a few possible entrances to a cave filled with comfort crystals.

A large, mountainous structure stands at the eastern edge of the inland sea and is commonly referred to as "Pteranodon Mountain." The namesake is due to the fact that it is an ideal nesting and roosting spot for the flying creature Pteranodon. Near the top of the mountain lies a cave with water and comfort crystals within. Many flying creatures can live there in relative safety, only having to leave the cave for food or water (if the small pool drains completely.) The only other creatures who can access the cave outside of a massive flood besides Pteranodon are the (currently not implemented) Tropeognathus and Velociraptor, the latter due to their ability to scale cliffs.

Shallow and filled with fish, kelp, and crossing players, the inland sea of the Ancestral Plains map is a wonderful place to live for most aquatic or semi-aquatic creatures and an inconvenience to terrestrial ones trying to move between the largest islands. However, the popularity of the location may lead one to unwanted conflicts. Aside from the sea being a high-traffic area, it is also heavily affected by tides. At high tide, no easy land crossings exist, allowing aquatics to move in and out as they please. At low tide, many easy land crossings emerge, allowing terrestrials to move freely. Unlucky aquatics who could not win the race against the tide will most likely be stuck until the tide rises again.