An in-game screenshot of an Auroraceratops player. 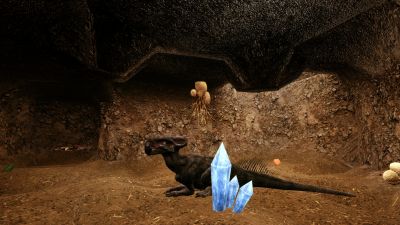 An Auroraceratops inside its burrow.

The Auroraceratops (also known as the Auro) is one of the AI critters that spawn on Isla Titania. It primarily serves as a source of food in terrestrial habitats for small or medium-sized carnivores. The AI has mediocre speed and frequently broadcasts calls to alert other creatures to its presence.

Players can temporarily transform into an Auroraceratops by interacting with its shrine hidden on the Isla Titania map. Upon interacting with the shrine, the player will spawn as an Auro with a random skin, have the ability to grow, and will have access to a talent tree similar to that of the Oryctodromeus. All AI characters, including the Auroraceratops, cannot be saved and will be deleted upon logging out.

As a playable character, the Auro is a herbivore that feeds primarily on small plants, anthills, and tubers that it can dig up while burrowing. It must also consume salt, or else it risks developing a diet deficiency and becoming sick. Like the Ory, the Auro has the ability to burrow and create tunnel networks.